Major work has begun on the first part of the Company's 23 mile long tunnel which will be used to transport fertilizer underground between North Yorkshire and Teesside ready for export around the world.

Jake Berry MP, Minister for the Northern Powerhouse, has officially broken ground for the tunnel at Sirius Minerals’ site at Wilton International, close to the former Redcar steelworks.

The innovative high efficiency underground system is a low impact, low carbon method for transporting large volumes of mineral to the port. Common industry practice would be to transport on either by road or rail – this major investment by Sirius removes that impact from operations. As well as the sustainability benefits, it will deliver an extremely cost-efficient transport system for the company when it is mining polyhalite that will last for generations to come.

The tunnel for the mineral transport system (MTS) is being built in three sections and it passes through one consistent and well known rock strata. The first section from Teesside is being built by one of the world’s leading tunnel construction firms, Strabag, which recently worked on the world’s longest railway tunnel – the 35 mile Gotthard Base Tunnel under the Alps in Switzerland.

The event represented the start of the construction to prepare the site for the first drive of the underground mineral transport system between Wilton and an intermediate shaft at Lockwood Beck, and is an important milestone for the Project.

A recent report by independent analysts Quod found the project will deliver decades of major economic benefits for the UK and have a transformative impact on the local economy.

At full production the project will add £2.3 billion a year to UK GDP; create over 1,000 long-term, high-skilled, high-paid jobs; generate exports of £2.5 billion a year, reducing the UK’s trade deficit by 7%; and make annual tax contributions worth £472 million a year to pay for vital public services.

“It’s the rapidly growing Northern Powerhouse with advanced manufacturers, makers and innovators like Sirius Minerals who are boosting exports from our region while helping us deliver a strong and resilient economy which is fit for the future.”

The new processing facility and harbour will sit adjacent to the South Tees Development Corporation site that seeks to regenerate area, including the former Redcar steelworks site, and potentially create up to 25,000 jobs.

The Project is expected to permanently add up to 17% to the economic output of North Yorkshire and increase the size of the Tees Valley economy by 18% and has the potential to attract new investment to the area through the creation of a new industrial cluster to support operations at Wilton and position Teesside as a major component in the important global fertilizer industry.

Ben Houchen, Conservative Mayor of the Tees Valley, said: “The ground breaking represents an enormous vote of confidence in Teesside and the development potential of the neighbouring South Tees Development Corporation site.

“The global vision of Sirius is exactly what is needed and will help to attract new investment to the area.”

Chris Fraser, Managing Director and Chief Executive Officer of Sirius Minerals Plc, commented: “It is an exciting time for the company as we continue to make excellent progress across the project.

“The life of the mine will span multiple generations, so the facilities that we are building here today will continue to provide jobs and attract investment to Teesside for many years to come.

“The mineral transport system is a clear example of Sirius’ commitment to delivering the most sustainable project possible, from both an environmental and operating cost perspective.”

Briony Fox, Director of Polyhalite Projects at the North York Moors National Park Authority said: “It’s great to see work starting on the tunnel. There couldn’t be a better solution to transport large amounts of polyhalite from the mine site to Wilton without having an impact on local roads and people’s enjoyment of the National Park.”

Thomas Birtel, CEO of Strabag, said: “We are delighted to be breaking ground at Wilton and are proud to be involved in helping to regenerate an area with such a rich industrial heritage”. 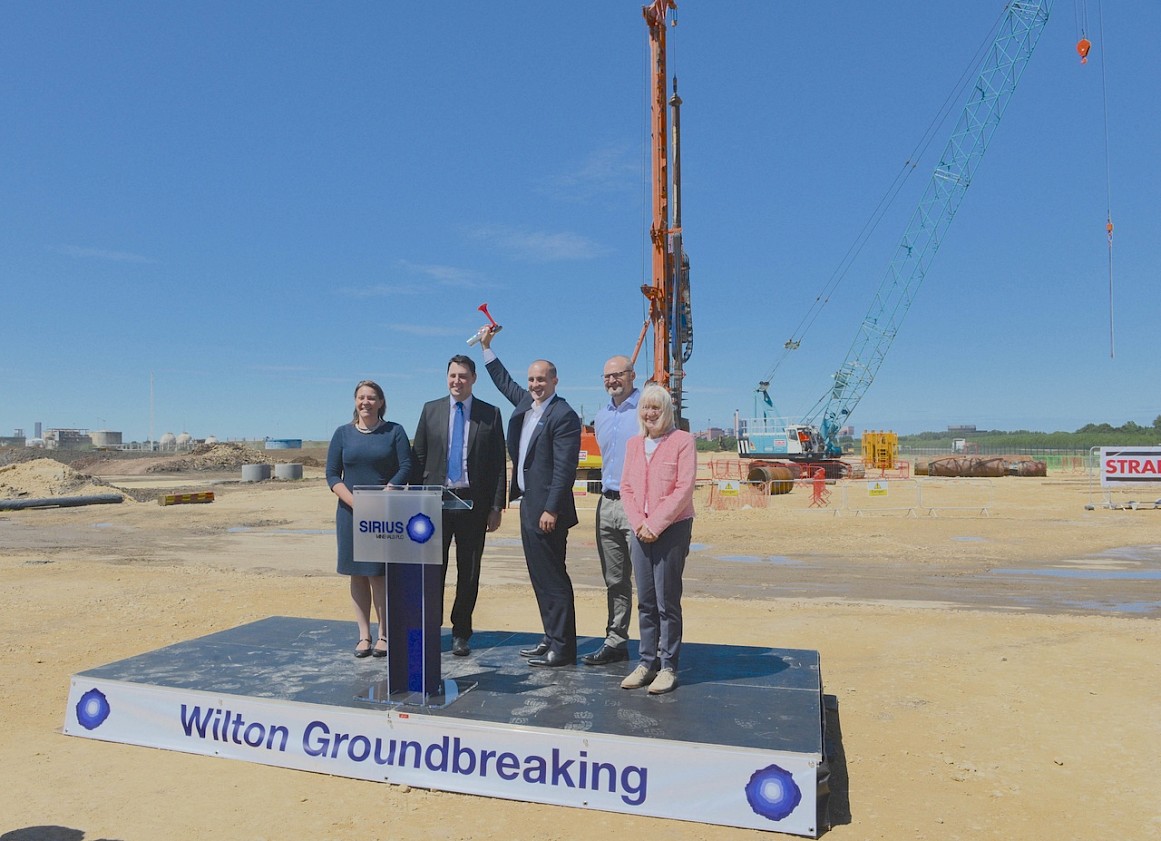