The public have been invited to decide on the winning name for the first of three 1,800 tonne tunnel boring machines (TBM) that will construct Sirius Minerals’ underground mineral transportation tunnel between Whitby and Teesside, as part of its new £3.2 billion polyhalite fertiliser project. 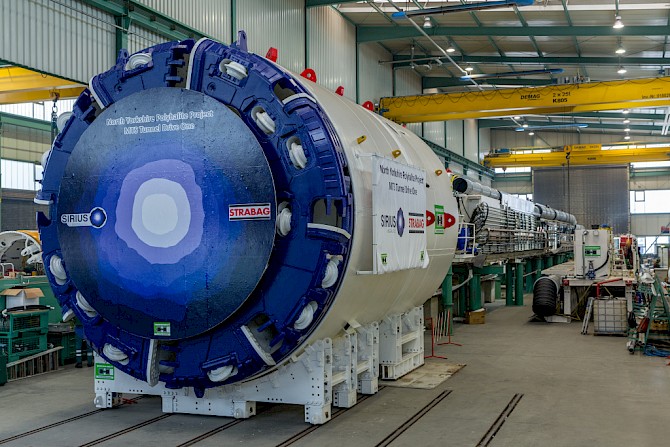 Over 20 schools from Redcar and Cleveland took part in a TBM naming competition, which was open to all primary schools in the area and involved coming up with a name for the machine and creating either a video, story, picture or TBM model made from recycled materials. A panel of judges from Sirius Minerals selected a shortlist, and a public vote will now decide on the favourite name, which will be printed on side of the 225-metre machine.

The three names shortlisted have come from two local schools: Ings Farm Primary in Redcar and Chaloner Primary in Guisborough. They are:

Gertrude – after Gertrude Bell, the famous explorer and archaeologist from Redcar (chosen because of her connection with the local area, archelogy and searching underground);

Stella Rose – chosen due to the word ‘Stella’ meaning ‘star’ in Latin (and ‘Sirius’ meaning ‘brightest star’) and ‘Rose’ from the famous local landmark, Roseberry Topping.

The winning team will be invited to the machine’s unveiling ceremony at its launch site on Wilton, where they will have the opportunity to reveal a plaque with the winning name, before it commences excavation of the 23-mile long tunnel.

“Coming up with a shortlist was a very tough decision”, said Matt Parsons, External Affairs General Manager for Sirius. “We visited many of the schools who took part in the competition and were hugely impressed by the enthusiasm and imagination that went into choosing all of the names.”

“Being a positive part of the local community is hugely important to us. We do a lot of work with local schools and it is fantastic to be able to give them an opportunity to play a part in our project”

The machine will bore the first of three separate tunnel drives which will make up the 23 mile tunnel from the mine, near Whitby, to a processing facility at Wilton International. Two other machines will be launched in 2020 from Whitby and Lockwood Beck to complete the final 15 miles of the six-metre diameter tunnel.

Once excavated and fitted-out, the tunnel will convey up to 20 million tonnes a year of polyhalite ore on one of the longest conveyor belts in the world. from the company’s new underground mine near Whitby, to a purpose-built processing and shipping facility in the shadows of the old Redcar Steelworks, for distribution around the world.

Tim Bethell, headteacher from Ings Farm Primary School in Redcar, said: “The children were delighted to have been able to take part in the naming competition and were really excited to make their models and hear all about the Sirius project.”

“It is taking place right on their doorstep and may even employ some of them in the future. We all look forward to watching it progress in the years to come.”

To vote for your favourite name, visit https://siriusminerals.com/tbm-naming before voting closes on Monday 1 April at 5pm. The winning name will be unveiled at the TBM launch ceremony in April.